Real Boxing™ brings you the most exhilarating, no holds barred fighting action ever seen on Android, Real Boxing's incredible graphics have been optimized for smartphones and tablets that are powered by the NVIDIA Tegra 3 processor to take you closer to the action than you ever thought possible.

Featuring ultra-realistic motion capture from real boxers plus amazing graphics from the powerful Unreal Engine 3, you’ll see sweat and blood fill the air and you’ll feel every hook, jab, and uppercut in Real Boxing, the most exciting boxing game yet on the Android.
Amazing 3D Graphics & Sound
The amazing Unreal-powered graphics and motion capture create astonishing levels of realism. Watch sweat and blood fly with every punch and see your opponent’s face taking injuries; then relish the slow motion action replay of your greatest KO’s.
Experience the roar of the crowd
Fight in atmospheric arenas with authentic commentary. See the flash of the camera bulbs, hear and feel the roar of the crowd like you’re really there.
Incredibly Deep Gameplay
Take-on Career Mode with over 30 fights and three belt titles to conquer. Fight over 20 opponents with their own unique and adaptive fighting styles then train your boxer with mini games including skipping rope, heavy bag and mini bag. Also play KO and Clinch minigames during a round for an energy boost.
Packed with Extra features & Customisation
Unlock new equipment, extra opponents and clothing. Customise your fighter’s appearance: hairstyle, skin colour, tattoos and clothing.
"This kicks ass...O.M.G. Real Boxing brings back that same "wow" factor we all had when we first saw a Tegra-optimized game. It's really that good looking, and playing" - Androidcentral
"It’s difficult to argue with a game that looks this good, and plays as well as Real Boxing does. There are so many things to like about this game, beyond howstunning it looks." 5 stars! Apps Magazine
"This Striking Boxing Game is Completely Unreal" Kotaku 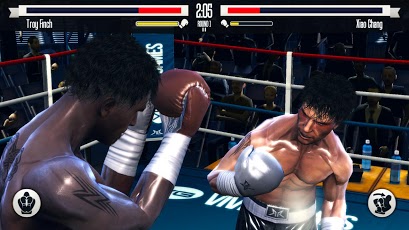 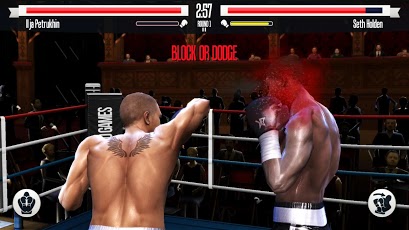